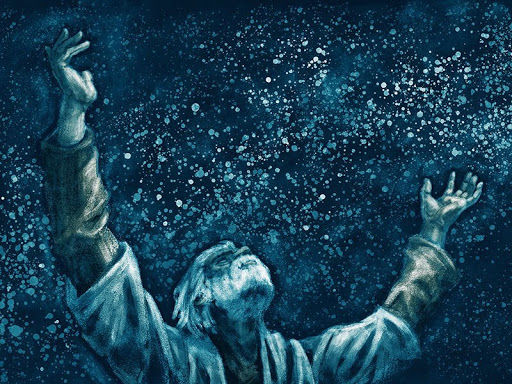 “And he brought him outside and said, ‘Look toward heaven, and number the stars, if you are able to number them.’ Then he said to him, ‘So shall your offspring be.’ And he believed the LORD, and he counted it to him as righteousness.” (Genesis 15:5-6)

The Lord God Almighty promised Abram that a child of his own flesh would be his heir. Through that heir, Abram would have numerous descendants, as numerous as the stars in the sky. Abram believed in spite of the circumstances, in spite his current situation, in spite of what he saw with his eyes. He believed God would fulfill his promise even though it appeared to be impossible since Sarai was barren and well past her child bearing age. Abram trusted God would fulfill the promise. That faith is what God acknowledged and rewarded by declaring Abram righteous, that is, totally acceptable and pleasing in His sight. This declaration was based solely on God’s love and mercy, and had nothing to do with Abram’s actions to date or the actions which were to follow.

Today, the word faith is primarily used in a generic sense to indicate systems of religious belief that prescribe adherence to specific detailed sets of ideas, tenets, values, rites, and commands. Sometimes it is also used to express confidence in one’s own abilities, or in those of another person or system, or in some form of higher power. These generic references to faith do not  express the essence of Biblical faith. Biblical faith is trust in God: that He is and that He always keeps His word and His promises. This faith is imparted by God Himself and enables us to persevere in the midst of circumstances that seem to belie or negate God’s promises, presence and power. His imparted faith determines and orders the shape of our lives.

As with Abram, God still declares men righteous based on their faith. He does this based upon His will not on anything a person has done or will do and despite whatever sins he or she has committed, will commit, or is struggling with. Faith believes in God’s forgiveness of sin based solely on the righteousness of Christ and His death on the cross. What God does by declaring us righteous by faith is in total contrast to the ways of our world, our cultures or our social structures. These reward people praise, honor, fame, and rewards for their achievements, fame, or physical appearance, but despise and denigrate those which it describes as losers, those who do not measure up to worldly values. But the Lord chooses the meek and lowly, the despised, the losers to be members of His heavenly Kingdom. How glorious is this great love of God!